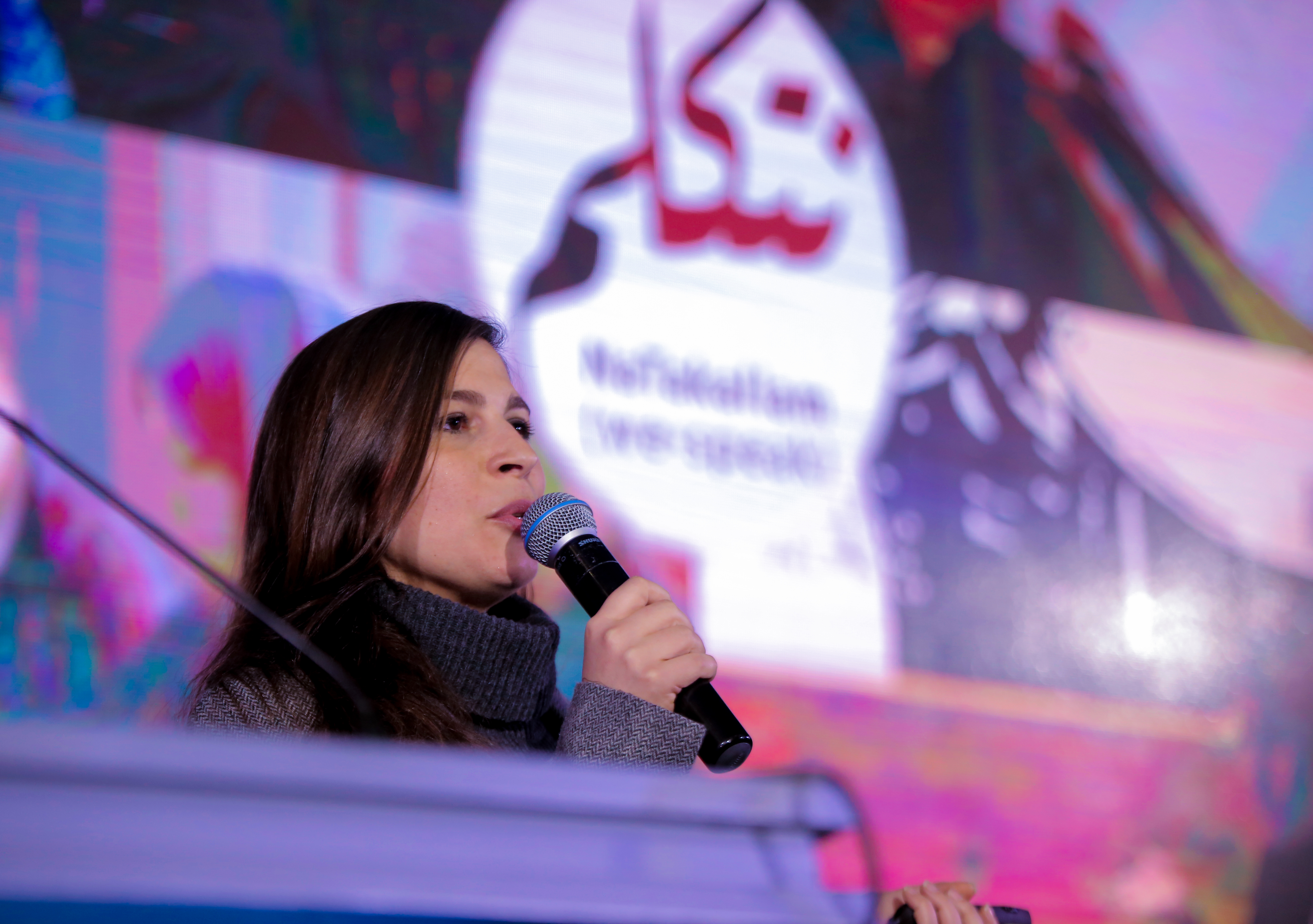 Aline Sara, SIPA MIA '14, is an entrepreneur, CEO, and co-founder of NaTakallam, an educational platform helping displaced people restart their lives and earn income. NaTakallam has a partnership with Columbia University, among other institutes.

Sara holds a B.A. from Tufts University and a post-baccalaureate from the American University of Beirut, in addition to her Master's Degree in International Affairs with a focus on human rights, conflict resolution, international media and advocacy, from Columbia University's School of International and Public Affairs (SIPA).

Our Rasha Biary sat down with her for an Alumni Spotlight interview.

I came up with the idea for NaTakallam in 2014 when I graduated from SIPA. I wanted to continue working on my Arabic. At the same time, I was watching the news in the Middle East from afar. Alan Kurdi washed ashore and the world woke up to the refugee crisis.

I had thought of NaTakallam before the photo of Alan Kurdi but launched it in the summer of 2015 in a pilot form, as part of a startup competition. We didn’t win but that pilot led us to create a public website. I had decided to keep pushing NaTakallam despite losing the competition, because I felt like there was something behind the idea. I started to ask friends of mine to post about NaTakallam. It happened to also be August of 2015, when the photo of Alan Kurdi went viral and there was heightened attention around the Syrian refugee crisis.

Funnily enough we got picked up by Sultan Al Qassemi. He tweeted about us and posted about us on Facebook, and that created a ripple effect.

We were a cute random website online. But then we got 5,000 shares, and 300 people signed up for Arabic sessions. That’s pretty much what launched NaTakallam.

What's the mission behind NaTakallam?

I was thinking that we can’t leave the Syrians in Lebanon without prospects or hope or an income source. Having done private tutoring, I felt that every time I did a tutoring session, I had a very nice friendship with my students. With a background in conflict resolution.

I put this all together and I thought wait, we have this thing called the internet today. We don’t need to be with someone to get tutored. It hit me at that moment.

What if there was a program where I could learn Arabic from a Syrian who is forcibly displaced from their country? They’re not allowed to work locally in Lebanon, but they can work in this virtual realm of the internet that is not bound by a local economy. It would be a win-win situation. That’s how I came up with the idea for NaTakallam in 2014.

Can you share a little bit on your journey to and since Columbia?

I studied at Tufts University for my undergraduate degree, with a background in Psychology and Philosophy. And after graduating, I didn’t speak very good Arabic and I had never lived in Lebanon besides the summers with teta - very frequent summers -  back in Beirut and in the mountains in Lebanon.

Then the 2006 war happened and I had to drop those plans.

I interned with Human Rights Watch, which was building a Beirut office at the time. I spent very powerful years there, as not long after, the region witnessed the famous Arab uprisings.

In 2011, I was accepted to SIPA, but, working as a reporter, in the midst of this incredible wave of upheaval in the region, I asked to defer until 2012, at which time I came back to NYC to start SIPA. And the rest is history.

December 18 is Arabic Language Day. Why would you say working with language is important?

Language is a window into the world. It opens doors. The more languages you speak, the more you are able to connect with others, empathize with others, and think outside the box. There is value to languages - whether it’s for your own opportunities and career, or whether it’s to make the world a better place.

The strongest argument I would give as someone who is focused on justice and humanitarianism, is that language is the first gateway into building bridges and to creating understanding and hopefully trying to make the world a better place.

How has Columbia appeared in your life since graduating?

Funny enough, Columbia is where I found my husband. He studied at SIPA with me. Many of my friends today are through my Columbia network.

For building NaTakallam, Columbia was critical. It was that startup competition that pushed us to apply. The following year, we won the SIPA Dean’s Public Policy Challenge Grant. That was the first competition we won with a $25,000 award, which is what propelled us. When you are launching a social enterprise, those first gains are the critical ones that get the ball rolling. In that respect, Columbia was critical to our success.

What's your favorite class during your time at Columbia?

One was our very basic Conceptual Foundations, which was a requirement for anyone doing a Master’s in International Affairs at SIPA. I had an amazing lecturer named Hisham Aidi. He’s written several books, including one on music and politics. It’s quite fascinating. My second favorite class was called Unconventional Warriors, which was all about non-state actors as actors of conflict.

What's your favorite book by or about Arabs?

One book that comes to mind is Amine Maalouf’s Identites Meurtrieres”which addresses constant identity crisis faced by individuals in or across the Arab World. as a Lebanese francophone who grew up in NYC, his book resonates a lot with me. 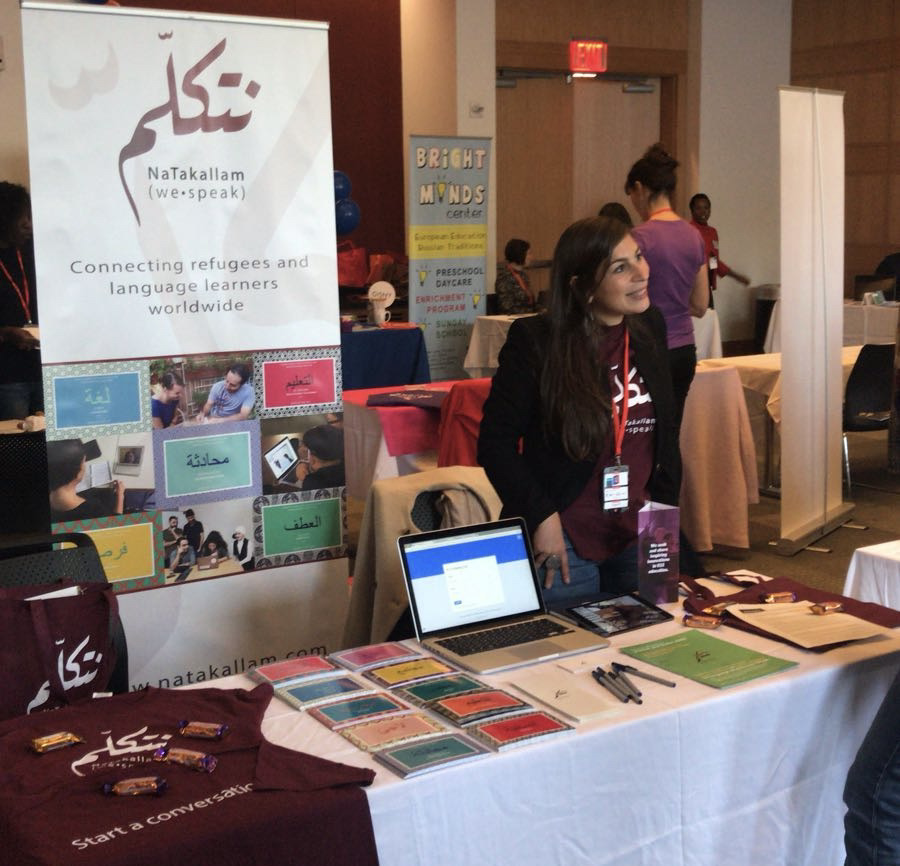 I think Alice’s Café at SIPA brings back fun memories, because I was a Follies Mismanager - one of the five directors of our annual skit comedy play. You create a whole show of parodies of life on campus and capture the funniest moments on campus. We performed at Alice’s, which we had turned into a stage.

What mentors have been most impactful in your life - are any of them from Columbia?

Many of us know Mona Khalidi. Mona is the teta - the connector. She’s always thinking of who to introduce to whom, and when to plan the next dinner to bring together the Arabs on campus. I still see her and update her on my son. It’s hard for me to think of Columbia, the Middle East, Arabs, and not have Mona have some very special recognition for me.

To what extent has being an Arab shaped your experiences, after you graduated?

I don’t think I could be more in touch with my Arab side than by creating a company that teaches Arabic by refugees from the Arab world. I am someone who is extremely attached to her origins and to the region.

I’m very determined to remain that way, to continue to invest in our part of the world to see it improve and bring back what I learn and pay it forward.

I think the Association can offer excellent people with common interests, origins, passions, and backgrounds to help each other out, connect, meet up, and give back to the region. There’s just an added bond and immediate connection when we meet.